This is in Beta - let me know if you hit problems

It's designed to run on browsers on PC's. It will run on mobiles/tablets but it might be slow, hard to read, and just less good, and for some reason the sound doesn't work yet. If you turn on Mobile mode in the setting menu it adds a couple of mobile affordances.

Note that while there is an auto-scaling option in the settings menu, if you're on a PC scaling the browser page usually looks nicer (ctrl + mousewheel).

Update: there's a now a standalone windows version - it should be considered more beta (beta-er?) than the browser version. Let me know of any problems.

On the main screen:

The game automatically saves to the browser storage - so won't be available if you use a different browser or clear storage.

At the moment there are no external saves - although you can find plugins to capture/restore local browser storage.

VERY cool! I can't believe this was made in bitsy/borksy! For some reason it seemed to crash for me trying to load the third dungeon, but no biggie.

brilliantly determined in minimalism... what the dev don´t like, must be really unnecessary... much more exiting than "i am overburdend" and "mortal glory". takes 20 minutes to get into the classic-retro-minimal construct  to get the addictive vibe of free decisions, somewhat selfinflicted, world destroing synergies, and relentless death-opportunities everywhere... story and title seems to be in an ironic-easy way, but this is getting darkest dungeon-like serious...SHINY hidden GEM!!!

is there a way to delete your progress?

This game is awesome, I'm really surprised I can't find any videos of it on youtube

Hey, thanks for the kind words -- I'm glad that you're enjoying it.

(I guess there's no videos of it because it's just a little hobby game with zero marketing behind it, and a dev who's not very good at self-promotion!)

Saving doesn't seem to work. You write "The game automatically saves to the browser storage" but there is nothing in localStorage and the game actually attempts to access https://v6p9d9t4.ssl.hwcdn.net/html/1558617/build/html5game/popsave.ini and gets a 403 there.

Argh - sorry, I just cannot reproduce this error at all. Does it behave the same way in other browsers?
Here's what my local storage looks like for reference:

(Not a fix, but if you're on Windows, the downloadable version would probably work for you).

ok nevermind, it works in safari. must be something weird with my firefox. ty for feedback.

Is the wrath of the goddess meant to turn all nearby enemies into barrels?

Yes! The in game reason is flimsy; she's a goddess of Dwarves, Digging and Drinking - so can turn her enemies in barrels of aged and volatile whiskey. The real reason is that it offers another risk/reward scenario - it can be used to clear a room full of enemies, but it leaves you trapped in a room with an angry goddess and lots of exploding barrels!

The machines are fun! At one point early on I had one that offered an agility artifact for way more than I can afford, a cursed thingy for minus (the exact same price). Luckily the curse landed on someone who was about to level.

I think I found the rare assassin variant.  I assume the assassin's regeneration works on the same principle as priest MP gain - burning XP each turn?

Yeah, even when I was testing it, I was surprised how tempting the cursed items were!

You are correct; the assassin's regeneration is exactly like the clerics - eating up that valuable XP.

Found out what happens when you get caught stealing. First thought: That doesn't seem so bad.

My hobby: making runs on lower-level treasure with only a rogue, trying to zip past all the enemies and make it out without dying.

Great game. I like the different classes, and the sense of humour. Is there any practical difference between same-coloured heroes like fighter/warrior, cleric/bard, barbarian/monk etc? Also how do Clerics/bards recharge mana?

Glad you're enjoying it!

To answer your questions:

(Best strategy for Cleric/Bard; hang back, use mana sparingly, hoover up loot. They're the hardest class to do a solo run with. I have completed a couple, but it's tough)

Interesting! That explains why picking a lock will sometimes yield mana.

I won't spoil but I think I've seen all the barbarian variants, as well as the vary rare rogue. Haven't seen any for some classes like archer (but then my archers tend to be high-level cheese machines and don't die often).

really cool !! i like the easy way we can move, dig in and fight with only a clik on the mouse

is there a way to see the lifepoints/damage points of each character ? or is it normal we can't because it's your choice (like, we have to be careful because we can die at any moment) ? or is it planned but you couldn't include lifepoints on the beta ?

Glad that you like it. If you click on the character itself you should see the stats - including hit-points.

Great work @cephalopodun! I love the graphics and sound effects in this game. I played for quite some time and have some feedback:

- The speed of the automatic scrolling between players feels very slow. In fact, the game is much more enjoyable when playing with a single character due to not having to deal with this, IMO.

- Being able to skip a turn and/or switch characters would help with pacing too. I would love to park a cleric somewhere safe, and have my other guys go fight, but the scrolling speed and having to move the cleric somewhere every turn gets old fast.

- The amount of money found in loot is insignificant compared to the value of treasures, making it feel worthless. It would be cool if there was a way to spend money in general, or at least money found within a single journey (maybe a randomly spawned shopkeeper to spend money found so far?)

- I encountered a bug where a bunch of stuff exploded, and a bunch of NPCs died, and the game froze. Maybe the game got stuck on a dead NPCs turn?

Hope you find this feedback useful. Thanks for making this cool game!

Thanks for the feedback:

- I experimented a lot with scroll speed; too snappy was disorientating. I'm okay with the current speed but I can see that other people might not be. I'll see about adding a configuration option - though I've got some bug-fixes to do first. (I don't mind there being a slight incentive to keep the party together, but I don't want it to be a pain.)

- Sorry, the can't skip a turn thing is a deliberate choice; I like the mini-puzzles that it generates, and the fun shambolic muddle when you're forced to get in your own way. (This is an adventuring team based out of a tavern, after all!). Sorry that this element isn't your cup of tea, though.

- You are right, money is fairly pointless - it's a consolation prize for not finding any proper loot. The treasures are meant to be the focus, but I have been thinking about a shop of some sort, just didn't get to it. So maybe down the line. (BTW: you do get more money if you send down a smaller party, or if you have a rogue in your party - but it's still fairly pointless)

- Ugh. I thought I squashed this one. But I'll put it back on the list.

Thanks again for the detailed feedback.

Which browser would be the best to play this on? I think I somehow managed to get this game to stall indefinitely on Chrome. Otherwise, this game has been a lot of fun, and I'm pretty sure I've been playing this for hours on end at this point!

Mostly tested on Firefox and Chrome - I doubt the stall was browser based, probably a bug in my code instead. Where did it hang?

As someone who doesn't really play roguelikes (and was recently intimidated by Caves of Qud) I love how approachable this is. I've already managed to trap myself in an exploding level after stealing something I really shouldn't have, and I know I'm going to come back for more dungeon-delving...

I'm really glad you enjoyed it. I admire the sort of roguelikes where you can discover that your dwarf is lactose-intolerant, and where the broken spoon you find on the dungeon floor has its own legendary backstory, but I tend to bounce off them. So this is a game I made for myself, with just the bits that I like.

Are there any chances for a downloadable version?

I'm working on a standalone windows version - but the code is fighting me, so no promises. At the moment it crashes if you hit an enemy, which is not ideal.

This is surprisingly entertaining. 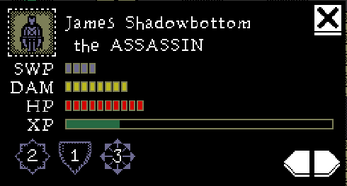 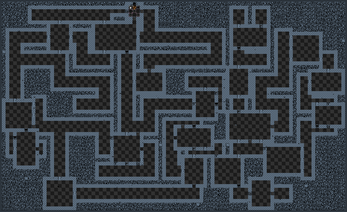 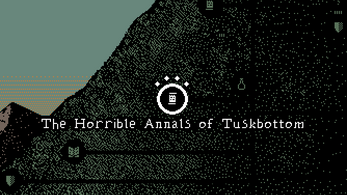