I'm Just Popping Down The Dungeon, Does Anybody Want Anything? » Devlog
1 year ago by cephalopodunk (@Zen_Benjamin)
Share this post:

Changelog for this latest version (which I calling 0.9, completely arbitrarily, since I forgot to name previous versions):

Additionally, as per a couple of requests, I made a Windows downloadable version. This was a useful, if painful, exercise in learning just how many bugs the html5 version was just quietly ignoring, but the windows compiler would flip out over.

The downloadable version has not been tested as fully as the browser version - it's easy to test on different browsers, but I only have one PC! So please let me know when you find bugs. 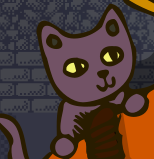 Get I'm Just Popping Down The Dungeon, Does Anybody Want Anything?

I'm Just Popping Down The Dungeon, Does Anybody Want Anything?

A rogue-like-lite-like-lite dungeon crawler with none of the bits that I don't like.